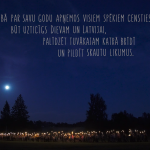 e story of Latvian scouts and guides is captured into the documentary movie “Always Prepared! — 100 Years of Latvians Scouting”.

Latvian Scout and Guide Movement celebrated its’ 100 Year Anniversary in 2017 by publishing book on the organization’s history (with the help of the Latvian scouts and guides overseas), organizing national jamboree “Centenary Bonfire” and hosting public conference on national youth policy about youth values, disinformation and the role of youth NGOs.

What do we know about the world’s largest youth organization’s branch in Latvia? What meaning do the  scout and guide symbols, traditions, promise and law, that have been practiced for over 100 years, have nowadays? First boy scout units started activities in 1917, and a few years later girl guides joined the movement. Characterized by such values as respect to nature, civil activism and responsibility, scouts and guides have continued their work throughout the first 100 years of Latvia. The centenary celebration – hikes, the book opening, national conference, winter and summer camps, and many other stories – are featured in the documentary “Always Prepared!”.

“An autumn hike is the first adventure when a kid decides to join the scout and guide movement. Together with cameraman Jānis Kešāns, we followed scout and guide activities during the year, portraying the organization through the values that they uphold: a good deed has to be done every day, reminded by the knot in the scarf that everyone has to make in the morning, values, respect to nature, volunteering, exploring, learning history, respect one’s country and community. We were surprised that even freezing winter nights won’t stop twelve years old kids from sleeping in the forest, building shelters and making bonfires. I recommend this movie to everyone, but especially to kids and their parents who would like to spend their free time doing various exciting activities in nature,” said the author of the movie Eva Johansone.

“Scouts and guides are an important of Latvia’s freedom, and we are keeping the freedom alive by being active and responsible every day. We tell stories and teach the kids to appreciate the value of being a free person in a free country. It’s not about idly sitting aside, it’s about taking an active part and helping Latvia both during the first 100 years and also during the next 100 years, and beyond”, stated scout leader Nils Klints who is featured in the movie.

The premiere took place in cinema on February 2018, followed by national screening on the public channel Latvian Television on Scout and Guide Friendships day (Founders day / Thinking day). The movie is available with English subtitles on the Latvian Scout and Guide Central Organization’s YouTube channel.

The movie features photographs from the archives of the Latvian Scout movement and photographs and features from the World Scout Bureau Inc. The movie has been supported by voluntary work from Latvian Scout and Guide Central Organization, donation by Yasuhiko Kawashima, and state budget financing from the Latvian Education and Science Ministry’s Youth Policy State Program’s funding for 2017 and 2018.